FESI leaders come together in Rome for General Assembly

FESI’s newly re-elected president is raising the bar for the European sporting goods industry, articulating his plans for the 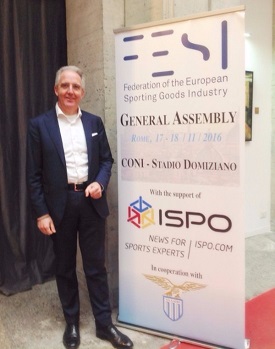 On the 17th and 18th of November, all representatives of the Federation of the European Sporting Goods Industry came together for the annual General Assembly, which took place this year in Rome. Central in this meeting was the evaluation of FESI’s functioning in the past and setting the tone for the organisation’s future activities, by presenting the milestones and objectives for the period of 2016-2019.

Another crucial point on the agenda was the election of the Board of Directors and the new FESI President. In office since 2011, FESI’s re-elected President Luca Businaro (pictured) underlined his vision for 2019 as “To be the leading voice of the European Sporting Goods Industry, reaching the highest political recognition, driving the promotion of physical activity and fuelling growth across all channels, for our membership.”

In order to achieve that, the Federation will continue delivering lobbying and advocacy activities in its 11 working committees which represent all the policy fields in which the sporting goods sector is active. Moreover, the organisation is planning to add another 3 working streams to its current infrastructure, namely:

• The expansion of services & adoption of a clear service strategy which includes: the organisation of regular training seminars and webinars on relevant topics, to provide business plans on commercial growth in the sporting goods sector and to launch European studies, in cooperation with national associations, European institutions and other relevant parties.

• Improvement of the relationship with national sports federations: achieved through the support of national incentives and a closer collaboration with European regions, especially with respect to the implementation of the European structural and investment funds. Furthermore, to streamline the relationship with the WFSGI (World Federation Sporting Goods Industry).

• Promotion and advocacy of “good governance and sports integrity” in the sporting goods industry: through the assessment of existing standards such as the SIGA universal standards[1] and by communicating the importance of complying with such instruments through dissemination and education.

In light of the above, FESI President Luca Businaro stressed that in his upcoming term he is planning to take the matter of sports integrity very seriously by cooperating with the ICSS (International Centre for Sports and Security) and other relevant stakeholders, in creating a behavioural standard. Also combatting the decline of physical activity by integrating various sports services, products and infrastructures on a European level and the further development of the economic dimension of sports, are top priorities. In terms of physical inactivity, the organisation is intending to continue strengthening cross-sectoral cooperation through available platforms and incentives like the House of Sport and the European Week of Sport, but also by organising additional events. With regard to the economic dimension of sport, Luca Businaro further comments: “Globally, as the leading organisation in the European sporting goods industry we aim develop the economic and innovation dimension in sport so as to reinforce political attention towards our sector. Herein we strive for sport to be officially recognized as a European industrial sector, to foster innovation in sport and to strengthen the European Platform for Sport Innovation as an instrument to also further increase research and development in the field of physical activity and health.’

Looking back at the past two years, the Federation has effectively pushed the significance of the sporting goods industry as a multidimensional entity on the political agenda. It convinced the European Commission to conduct a study on the sector, has successfully launched an anti-counterfeiting campaign in cooperation with the EUIPO (European Union Intellectual Property Office) and is proactively engaged with EU policy makers in a number of domains including: product safety, sustainability, trade relations with non-EU countries and the recently established Digital Single Market.

FESI Secretary General (Alberto Bichi) strongly endorses Luca Businaro’s strategies and concludes: “The Sporting Goods industry is an ever evolving constituency, composed of a multitude of stakeholders from the textile & apparel, footwear and equipment sector. This inherent diversity allows us to cater to the needs of growing audiences but also implies a shared responsibility to help shaping a healthier European economy and society. Altogether, it is therefore crucial to clearly define the role and position of the European Sporting Goods industry towards both the European institutions but also the private sphere”.

ABOUT THE FEDERATION OF THE EUROPEAN SPORTING GOODS INDUSTRY & THE HOUSE OF SPORT- FESI represents the interests of approximately 1,800 sporting goods manufacturers through its 12 National Sporting Goods Industry Federations and its directly affiliated member companies. Moreover, 70 – 75 % of FESI’s membership is made up of SMEs. In total, the European Sporting Goods Industry employs directly and indirectly over 650,000 EU citizens and has an annual turnover of some 66 billion euro. Herein, FESI plays as the founder of the House of Sport alliance – together with its nineteen partners, a crucial role in raising awareness on the benefits of sports and physical activity through cross-sectoral cooperation. Note that FESI is also an official partner of the European Week of Sport. More information at: www.fesi-sport.org.